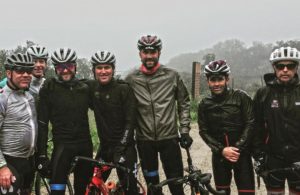 If there was ever an actual secret to turning highly-talented athletes into champions it is simply this: Toughen them up. Whether you’re trying to win the Paris-Roubaix, get through a 200-mile gravel race, or hang with the fast group ride, it’s going to take more than talent, available training time, and hi-tech gear. You’re also going to have to get tough.

We have a lot of misconceptions about toughness. It has nothing to do with being aggressive or mean. Toughness is your ability to absorb abuse and handle adversity, all while staying focused on your goal and keeping a level head. Legendary Irish cyclist, Sean Kelly set a standard for toughness that has influenced lives and coaching styles ever since I trained and raced with him as an amateur and pro in Europe.

Off the bike, he was unassuming and spoke so softly you could barely hear him. But on the bike, he didn’t care if he was outnumbered, out of water, freezing cold, or riding through floodwaters. He was able to push himself further than anyone else. It certainly helped that he had an enormous aerobic engine, but he earned many of his victories because he was too tough to let adverse conditions or circumstances slow him down.

When I was a young coach, getting young riders over to Europe was one of my big priorities. We went to Belgium. The weather was terrible and the food was worse. The accommodations were half a step up from squalor. It wasn’t that I was trying to punish them; that was simply the reality of elite amateur racing in Europe at the time, and the Belgian and Dutch guys they were competing against could thrive in that environment. They had been racing, aggressively, in wind and sideways rain, over cobblestones and narrow roads, since they were boys. To win, our guys had to embrace the discomfort and get on with the job, because everyone else already had.

These days my coaches and I work more with time-crunched career professionals and working parents, but teaching toughness is still a big part of the coaching process. As an athlete, the key to getting tough is accepting that nothing will ever be perfect.

Misery Is a Choice

Some riders are defeated the second they open the blinds and see rain. The prospect of a wet day in the saddle destroys their morale. Rain may be the reality, but your response to it is your choice. You can choose to be miserable, or choose to gear up and get on with it. Better yet, spin the situation to your benefit: use the weather as your teammate. Riders who gripe about the weather are quicker to quit when the going gets tough, so go on the offensive and let the weather multiply the impact of your effort.

There are racers who could be World Champion if the race was held on a sunny, 75-degree day in Boulder, CO; provided there was no wind and they could have their raw food smoothie and perfectly made latte beforehand. And I’m not picking on Boulder; there are athletes everywhere who can only perform in ideal conditions. They are usually the local superstars who have never had a notable result on more than a regional level.

Your power and fitness are important, but you also have to develop your toughness by proactively exposing yourself to discomfort or uncertainty. This means training in the rain or when it’s ridiculously hot or blowing like a tempest. It means getting comfortable eating whatever’s available rather than stressing over a perfect nutrition plan. It means staying in an event even after a crash or a mechanical has taken you way off goal pace or off the back of the pack. The more you can embrace discomfort and uncertainty in training the better prepared you will be to work through it in competition.

Sean Kelly and Stephen Roche taught me a valuable lesson about toughness following the 1986 Paris-Nice. They were staying in the same hotel as the 7-Eleven team in the south of France for the week between Paris-Nice and Milan-San Remo. My teammates and I were thinking a rest week was in order following a tough stage race, but Kelly and Roche invited us out for a strong midweek ride.

It was rainy and cold and all I wanted to do was lay in the hotel, but I joined them with a few of my teammates. The ride ended up being seven hours. Kelly and Roche pulled for the first 4 hours and although it was everything I could do to hang on, they seemed at ease with the pace, hills, rain, and cold. When Sean finally looked behind him after 4 hours, it was just me and, I think, Davis Phinney left. “Where’d everybody go?”, Kelly asked with his lilting voice.

A few days later I had perhaps the best ride of my pro career, cresting the top of the Poggio in Milan-San Remo with a fighting chance to be in the finale. Kelly won and I got caught behind a crash on the way down, but that midweek ride with Kelly and Roche had pushed me beyond what I had previously known I could withstand. Getting tougher is that process of pushing beyond your perceived limits and realizing you can do more.

Turning on Your Toughness

When the going gets tough, the tough get going. But how? Take some cues from elite athletes and soldiers: stay calm, eliminate extraneous thoughts and actions, rely on ingrained routines, and stay positive. When it’s time to get tough, you have to narrow your focus to exactly what has to be done now. Don’t think too far ahead. Get through now and then move on the next step. Stop thinking about what could go wrong or how you got into this situation; clear your mind so you’re just making the decisions necessary to go forward. Above all, use positive self-talk to maintain a mindset for success. You’re already carrying on a conversation in your head; make it a positive one.

Toughness is less measurable than power output, but there’s no doubt that improving your toughness yields real results. Prepare the mind and the body will follow.